Amazing Grace came from an unusual source of inspiration. It was written after a sailor underwent a religious conversion after surviving a storm at sea. It is not an Irish song but has been popular in Ireland for more than a hundred years. It is one the most widely recorded songs of all time. 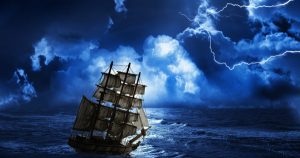 However, it is equally popular with people who wouldn’t describe themselves as Christian or religious, yet are moved by the beauty of the words and the melody. It was written as a verse prayer and for many it remains an important part of the Christian cultural heritage.

The lyrics to Amazing Grace were written by the English priest John Newton and first published in 1779 under the title, Faith’s Review and Expectation.

It didn’t become widely known as Amazing Grace, taken from the opening words of the song, until music was added many years later.

Newton began his working life as a seaman and had no religious conviction. However, his ship got caught up in a storm off the Irish coast near Donegal. It looked as though all on board might be lost.

In desperation, Newton called to God to save him. As he cried out, some of the cargo is said to have broken loose and plugged a hole where the ship was sinking. The storm eventually subsided and all on board survived. Newton was so affected by the experience that he underwent a spiritual conversion.

As a seaman he had been involved in the slave trade, but after his conversion he began to campaign for the abolition of slavery. He started to study theology and was ordained into the Anglican Church in 1764.

Newton wrote the words that would become known as Amazing Grace as part of a New Year’s Day sermon he gave in 1773. It had no music at that time but was probably recited in unison by the congregation.

Almost as soon as Newton first published Faith’s Review and Expectation, composers started adding music to it. It was given at least 20 melodies in the 18th and 19th centuries, but it had to wait more than 60 years before it joined forces with the melody we now call Amazing Grace.

The English lyric and the American melody