Bono took to the streets on Christmas Eve to knock out some festive tunes to raise money for the homeless in Ireland. 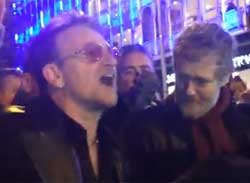 The U2 frontman and rock legend has been busking on the streets of Dublin for the past five years during the Christmas period to generate money and support for The Simon Community and the Peter McVerry Trust.

In previous years Bono has been joined by various music stars including Sinead O’Connor and Mundy. This year Glen Hansard, the lead singer and frontman of the Frames, was alongside.

A crowd of around 1,000 gathered to watch the three hour performance on Grafton Street, Dublin as the two stars belted out traditional Christmas Carols such as Come All Ye Faithful as well as rock favourites I Wish It Could Be Christmas Everyday and Merry Xmas Everybody.

Bono has a history of using his profile to help raise money for numerous worthy causes. He has campaigned to end AIDS and poverty in Africa and met Nelson Mandela on several occasions.

He was also a key part of the 1980s pop concert Live Aid, which raised millions of pounds and put the problem of poverty, and the suffering it causes, firmly in the public eye.

Here is a video of Bono and Hansard busking in Dublin.