Sean Potts, one of the founding members of the Chieftains and a towering figure in Irish music, has died at the age of 83. 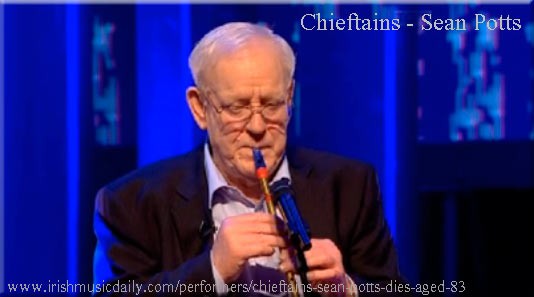 He was in the vanguard of the movement to rediscover traditional Irish music in the 1950s.

Potts was born in Dublin in 1930 and started playing the tin whistle at an early age. By his late teens he was one of Ireland’s most accomplished players and caught the attention of Seán Ó Riadá who formed the musical ensemble, Ceoltoiri Chualann.
Read more and see video

Potts became one of the founding members of the group and played alongside another promising young musician, Paddy Moloney. The two left Ceoltoiri Chualann in the early 1960s to form the Chieftains

It was a band that was to go on to sell millions of records and redefine Irish music across the world.

At a time when Irish traditional music was dominated by boisterous singing groups like the Dubliners and the Clancy Brothers, the Chieftains concentrated on instrumental music, drawing heavily from great Irish composers like Turlough O’Carolan,

Sean Potts whistle playing was admired for its ease and purity of tone. He also played bodhrán and bones.

He was a mainstay of the Chieftains in the early years before leaving in 1968 to go solo. He rejoined the band 1979 before leaving again. He founded the group Bakerswell and featured regularly on radio in Ireland.

Together with the Chieftains, he was a huge influence on countless Irish musicians over the last 50 years.
Sean Potts performing in 2010.