Celtic Thunder star Colm Keegan has a very busy year ahead of him. He is preparing for the band’s Symphony show, as well as a new solo show with Laura Durrant and a show with Emmet Cahill called ‘Celtic Comet’.

He is also has a new solo single in the pipeline and is hoping to find the time to shoot the video before the Celtic Thunder Cruise.

Irish Music Daily caught up with the singer for a Q&A about the next few months. 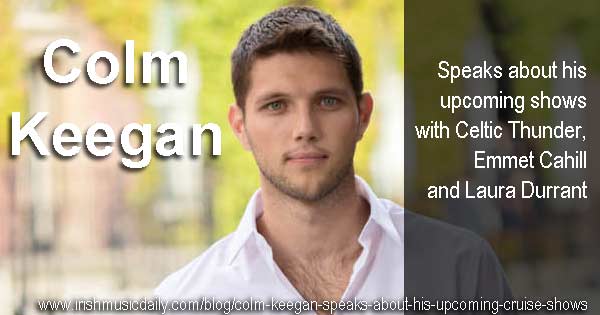 Irish Music Daily: What have you been up to over the summer? Did you get a good holiday?

Colm Keegan: Had a great summer thank you, not much of a holiday but had a very productive few months. It was decided by myself and Laura while on tour with Celtic Thunder in Australia that we were going to give a solo tour a shot.

That meant in the few weeks between the end of that tour and start of August we had to book venues, organise transport/accommodation, have an online merchandise store, merch to sell at gigs, have a CD which we could sell at the gigs so organising studio time, set list and production of sound and cover and then, when all that is done, start thinking about a setlist of what to perform! Really busy few weeks but some really important ones and hopefully we’ve started the beginning of a product which will develop and tour for another while yet.

IMD: Tell us about the new single you’re working on. How did you go about choosing a follow up to the Dance?

CK: We’re hoping in the next few weeks to have two more videos available on YouTube and the release of a single that was written for our solo tour. There are still a few logistics to sort out but we’ve heard from Cathy Dunne and ReelRaven Films who have agreed that they’re interested to shoot the video, the same production team that shot the video for The Dance. Cathy’s a very good friend of mine and brilliant at what she does so we’re hoping to shoot that in the next few weeks.

IMD: Tell us about your plans for the Celtic Comet show with Emmet Cahill

CK: Ah yes, the question a lot of people have been asking! The difficulty a few people are stating is that for our premier show last year we had the luxury of choosing the most ridiculous setlist without anyone knowing or expecting it. This year the expectation is to be outrageous so we’ll have to plan this properly!

All I can say is last year we just chose songs we enjoyed singing and then songs we thought would be fun, this year we’ll do the exact same thing and see what happens! Our show last year was one of the most enjoyable gigs I’ve done! Just fun, start to finish, so I’m really looking forward to it again this year.

IMD: You’ve worked very successfully with Laura Durrant. Will you be working with again? A tour …or new recording?

CK: We decided after the tour to take a week or two off, so that’s where we are right now. But while on tour a lot of plans were made about upcoming potential projects. With the Celtic Thunder cruise coming up in November, we’re hoping to have a few things done before then while preparing for our show on the cruise as well. Our show on the cruise will have numbers from our tour for people who missed out, while maybe a few new surprises as well for those who did see it so we’re definitely keeping each other on our toes!

IMD: Do you like doing the Cruise shows? Are they very different to other performances?

CK: They are different and I’m not too sure why! But I love them! I think when you’re on the cruise, you’re sharing the experience with everyone in the audience as well. We’re doing shows that our new to us as well so it’s really different to a normal solo tour, or even a Celtic Thunder tour.

The cruise is a really intimate setting where we’re all just trying to have a good time so, with that as the underlying theme of the week, it really makes for some memorable moments on and off stage

IMD: What do Celtic Thunder have in store? Is it strange being without George?

CK: It is strange, no question, we miss George hugely every day, I still expect to hear from him at any point, but we’re all going through it together. One of the nicest nights we had on a very difficult Australian tour was when all the guys sat around the bus and just shared story after story of George and we just sat around laughing for hours.

He was definitely with us on that tour and we know he will be with us moving on as well. We’ve welcomed Emmett O’Hanlon to the group and I had the pleasure of meeting him a few weeks ago while on tour. Emmett’s a lovely lad who will fit in great and we’re looking forward to working with him for the Cruise, Symphony and Very Best of Tour this Spring.

IMD: Tell us about the Symphony show? What can fans expect?

The Symphony tour is going to be completely different to any other Celtic Thunder experience you may have had in the past. The chance for any singer to stand on stage with a full Symphony orchestra behind you is a dream, to say we’re all excited about this is understatement. There’s still a huge amount to learn musically for it, so October is really shaping up to be a hectic month! Really looking forward to it

CK: Finally, what are your long terms plans into next year?

Well before the end of September and October I’m hoping to have a single released which those who came to our solo show have already heard, two new videos and new images available online, we then fly to Miami for the CT Cruise and Symphony tour. After Christmas it’s prep time for the Very Best Of tour in Spring and then I’m hoping to extend my traveling concluding with a Solo Tour after Spring. So a really busy few months ahead but, as always, very exciting times. I would like to thank everyone who made my premier solo tour possible.

Thanks to Colm for taking the time to answer our questions. He has a busy few months ahead before the end of the year and will keep be keeping fans up to date via his Facebook and Twitter pages.

Back to Colm Keegan main page

Colm Keegan on ‘The Dance’