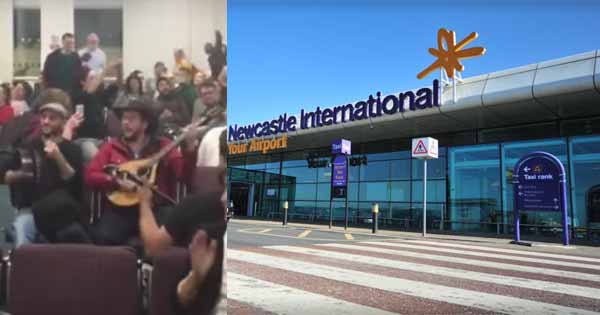 A simple matter of their flight being delayed wasn’t enough to get this group of Irish holiday makers down in the dumps.

The traditional Irish band Daoirí Farrell had the misfortune of being trapped in the departure lounge at Newcastle Airport as their flight to Ireland was delayed.

The room was full of people who were all bored, restless and miserable so the band decided to lighten the mood.

They took out a guitar, bodhrán and a lute and belted out a performance of Irish classics I’ll Tell Me Ma and Wild Rover.

It wasn’t long before everyone in the terminal had cheered up and were singing along with the band.

One of the passengers – Dee Cahill – took a video of the impromptu performance and posted it onto her social media page.

She told Joe.ie: “The reaction by everyone in the lounge (predominantly Irish and all strangers) was incredibly uplifting. It truly showcased how much craic the Irish really are.”