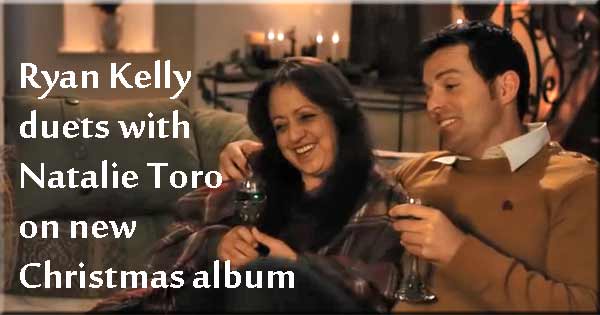 Already a star of the New York stage, she has now turned her talents to her music career, and admitted she got a bit of help from Irish music stars Ryan Kelly and Phil Coulter in the production of the album.

Toro first got the bug for performing live when she was just five years old when she appeared at an Amateur Night set at the iconic Apollo Theater. Since then, she has appeared in countless productions on Broadway and played lead roles in classic musicals and plays such as Jesus Christ Superstar, Les Miserables and Evita.

However, recently she took time out from her busy acting commitments to produce a brilliant festive album named ‘Just in Time for Christmas’.

The album features Celtic Thunder star Ryan Kelly, who duets with Toro on the classic Christmas tune Baby It’s Cold Outside. There is also a song written by legendary Irish music writer and producer Phil Coulter.

Irish Music Daily spoke to the New York songstress to ask her what fans can expect from the album, what it was like working with Kelly, how she fist met Phil Coulter.

How did you get to know Ryan Kelly and what made you want to perform with him?

I am friends with Phil Coulter and since he was part of creating Celtic Thunder, I asked if he could put me in touch with Ryan. We had our first meeting through Skype, he in Ireland and me in New York City. He was so down to earth and his good looks were just an added bonus. It was as if we had been friends for a long time, laughing and giggling like teenagers. I discovered that Ryan loves Broadway, so that was a plus for me.

Ryan is a professional artist who graciously took direction on our vision of the song and video. My producers, Andrew and Dawn Makay flew Ryan in to NYC and I went to the airport to pick him up. I was so nervous and excited. I felt so honoured that he would fly all the way to New York to sing a little tune on my album. I will say that because Ryan agreed to sing with me, we arranged this song, “Baby, It’s Cold Outside” like it has NEVER been arranged before. It has a Celtic flair and a dance feel that according to Ryan, was very authentic and fresh. My arrangers, James Lum and Bruce Wangsanutr did an amazing job. We had so much fun putting it together. Ryan was a trooper through the whole recording process, and needless to say, we sang, laughed and giggled some more. I even felt a little Irish!

What drew you to the Phil Coulter song, “Our First Christmas Together”? Do you know Phil well?

Do I know Phil??? Phil Coulter and I go way back to concert work here in NY where we sang for the charity The Physically Challenged Irish and American Youth Team. This is a wonderful charity led by William Broderick that has helped so many young people from Ireland and America. William Broderick, myself and other Broadway artists flew to Ireland and performed at The National Concert Hall. It was amazing to share the stage with the great Phil Coulter. So, year after year I would ask Phil where was the song he was writing me? And he would say that it was coming. We had a laugh every time and it became our running joke. Then when it came time to record this album and he and I were talking about Ryan, he asked me if I wanted to record a Phil Coulter original. I screamed back, “You finally wrote me that song?” And he said no, that this was a song he had written a while before but would be perfect for this Holiday CD. You know, when Phil asks you to sing one of his songs, you run to the recording studio. I did ask him what kind of freedom I had with the arrangement and he said to do what makes me happy. And I did just that.

Our First Christmas Together. Natalie Tora