A happy couple had a special guest turn up to their wedding, as international rock star Bono strolled by and stopped to pose for some photos.

Sinead O’Sullivan and David O’Connor tied the knot in Dalkey, South Dublin and were enjoying the reception at Colliemore Harbour.

When to everyone’s surprise, U2 frontman Bono joined the party. He had been out for an afternoon walk when he stumbled across the wedding party and decided to drop in.

He was asked if he would mind posing with the newlyweds for a couple of pictures and was happy to oblige, even bending down to kiss the bride’s hand for one snap.

Carol Ryan, who was the official wedding photographer said: “We were taking photos and had just finished when Bono strolled by, out walking off his Christmas dinner. 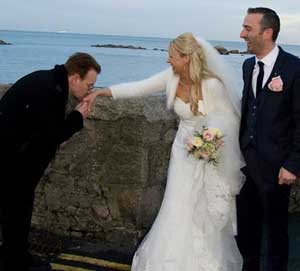 “I asked him if he would be photographed with Sinead and David and he said of course. I have to say he was a real gent.

“We took a snap or two, he kissed Sinead’s hand and continued on his walk leaving us all a bit stunned.”

Bono has enjoyed the festive season in his native Dublin. He spent Christmas Eve busking on Grafton Street, along with The Frames frontman, Glen Hansard.

Bono has busked the streets of Dublin for the past five years on Christmas Eve to raise money for The Simon Community and the Peter McVerry Trust as well as other homeless charities.