Slap on the wrist for Bono over handshake

Irish music star Bono found himself being told off by Pakistani teenager Malala Yousafzai when he presented her with a peace prize in Dublin from Amnesty International. 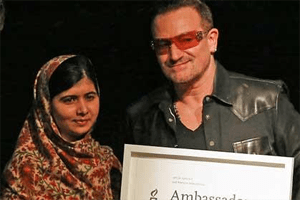 Malala made news headlines around the world when she refused to be intimidated by the Taliban who were trying to prevent girls from being educated. She spoke out against them and continued her studies.

They shot her in the head and she had to be taken to Britain for emergency treatment. Malala is now recovering but remains defiant against the Taliban.

Her bravery and her speeches in support of peace and tolerance have won her admirers across the world.

‘Totally against our culture’

Amnesty International recognised her courage by giving her a special peace award, presented by Bono.

The U2 star inadvertently breached Pakistani etiquette by shaking hands with Malala during the presentation. “That’s totally against our culture,” she told him with a smile.

The spirited 16-year-old wasn’t shy about poking gentle fun at Bono’s fashion sense. She told the Times newspaper: “Can you imagine – he was wearing sunglasses at night!”

A spokesman for the Pakistan Welfare and Cultural Association was quick to point out that Malala wasn’t really offended by the handshake. He said: “A girl shaking hands with some man, it is not possible in the society and culture where she comes from. That’s what she is referring to, and making a joke of it.”

Malala has now been offered honourary citizenship by Canada, making her only the sixth person to receive such an offer.

Bono is now putting the finishing touches to U2’s new album, which is due to be released in the New Year.