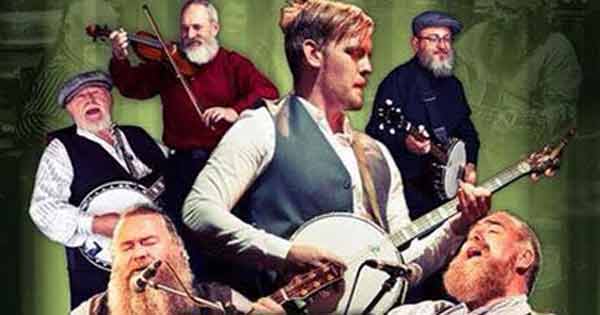 A stage production that celebrates the Dubliners’ career and is named after their classic and controversial single ‘Seven Drunken Nights’ is set to tour the UK for a second year.

The show is called ‘Seven Drunken Nights – The story of The Dubliners’ and will take in aspects from start to finish of the Dubliners’ magnificent 50 year career.

The audience will be taken back in time to the early days when the band made a name for themselves in Dublin’s famous O’Donoghue’s pub all the way through some of their most famous TV appearances and performances.

The cast and crew are some of the most talented Irish music performers from Ireland and the UK. Take a look at their biographies below.

When Seven Drunken Nights was first released in 1967 it was considered far too rude to be broadcast, due to the raunchiness of the final two verses.

It was banned by Ireland’s national broadcaster RTÉ. However, it was then championed by the more rebellious Radio Caroline, who gave the song major coverage. This led to a television appearance on Top of the Pops and a huge hit in both Ireland and the UK.

Take a look at the trailer for Seven Drunken Nights

Ged Graham who created and co-produced the show said: “Both myself and fellow cast member Billy Barton were born and raised in The Liberties in Dublin and grew up listening to The Dubliners. I don’t think that there is any musician in Ireland who hasn’t been influenced by their music. The Dubliners hold a unique place in the hearts of not only Irish people but people who love folk music generally and epitomise the image of an Irish Ballad Group.

“There is still a love and respect for the music of The Dubliners. The music may somehow have been diluted over the years but what we wanted to do with the show is bring it back to life and put it in the context of it’s time. When The Dubliners name was retired in 2012, it sowed the seed for creating a show that would tell the story of The Dubliners, and keep their music alive.

“Seven Drunken Nights is very much an audience participation show. People can expect to hear all of the classic songs of The Dubliners and to feel the energy of the lads at the peak of their performing careers. It will be a guaranteed great night of music, song and craic!

“The show includes some of Irelands most talented musicians, singers and storytellers who bring you a feel good show that will have you singing along from the opening number right through to the last rousing chorus.”

Born in Dublin, Ireland into a musical family Ged has been playing music and performing for over 30 years sharing the stage with some of entertainment’s biggest names. Ged recently undertook a 42 date UK theatre tour with the new musical Ireland’s Call playing the part of the narrator. In addition to performing in the show Ged co-wrote the musical and was creative director for the project.

Born in Manchester to Irish parents Danny has been involved in music all his life with Irish music in particular being part of his DNA. His family on his mother’s side were part of The Jay Byrne Showband and many of their songs found their way into Danny’s repertoire. The singing of his mother was particularly influential on Danny and many of the traditional songs he sings today were learnt at her apron strings. Danny has toured extensively in the UK, Ireland and Europe.

Born in the heart of Dublin into a family of musicians with a rich heritage of Irish music and culture. Billy is indeed the real deal, a true Dub. His father Tommy Barton ‘The Gentleman Busker’ was at the core of Irish music in 50’s and 60’s Dublin and was the first person to be invited to play music in the legendary O’Donoghue’s pub birthplace of The Dubliners. Billy grew up with Barney McKenna who was a regular visitor to the house to receive banjo lessons from his father Tommy and Billy even got his first tin whistle from Ciaran Bourke.

Billy has been involved in producing and researching a documentary of his father’s life which included intimate interviews with his lifelong friends Barney McKenna, Ronnie Drew and Finbar Furey.

Born in 1989 into an Irish musical family Paddy has lived Irish music since the day he was born. An accomplished multi instrumentalist, singer and songwriter Paddy was inspired watching his father play music and he joined him on stage as a regular member of his band at the age of 10. Paddy has toured extensively in Ireland, England, The Netherlands, Denmark, Germany, Belgium, Spain, Canada and America. He is the recipient of three Irish Music Association awards and most recently released his first solo original album ‘Man In A Box’ recorded in Los Angeles. Recent collaborations have included Geoff Blythe (Dexy’s Midnight Runners / Black 47) and Greg Camp (Smashmouth). Paddy is excited to be joining the cast of Seven Drunken Nights.

Born in Co Donegal Ireland. Conor is an established multi instrumentalist with fiddle being his first instrument and his musical passion. Music has been a major influence in his upbringing (born in a rural pub in Donegal) Conor was exposed to traditional and country music at an early age and formed his first band ‘Rockall’ at 16 performing throughout Ireland. It was during this time that Conor earned the name ‘The Donegal Fiddler’.

Conor has toured extensively throughout Ireland, England and most recently held a residency in Salou, Spain.

Max was born into the theatre business having grown up touring with the record breaking stage show That Will Be The Day. Max started beat boxing in 2004 and went on to be placed in the top five beat boxers in the UK he has collaborated with some of the countries premier DJ’s and producers. Touring was cut short when he was involved in a serious car accident in 2011. During his long recovery his passion for electronic music grew and he has now started to write and produce his own music.

Dave is one of the North of England’s most sought after cinematographers and has been operating his independent TV production company for over 19 years. Dave’s work has been broadcast on many platforms including BBC and ITV and he is also a regular contributor to SKY TV. His TV company has produced promotional DVD’s for some of Ireland’s top showbands and recording artists. Dave brings a wealth of experience to the production of Seven Drunken Nights and is looking forward to capturing the spirit of The Dubliners.