The folk hero appeal of Whiskey in the Jar 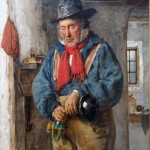 A Nip Against the Cold

Because of its title, Whiskey in the Jar is often seen as a drinking song, celebrating the wild life.

That doesn’t really do it justice though. Whiskey in the Jar isn’t really about drinking at all; it’s about rebellion against authority and has a sub-plot involving betrayal by a lover. The highwayman in the story is a forerunner of many American folk heroes such as Jesse James.

The song’s themes of rebellion and betrayal strike a chord with people all over the world.

– as shown by the fact that it has become so popular through the performances of major rock bands like Metallica and Thin Lizzy.