Landmark Performances by The Chieftains

The Chieftains have broken down a few barriers and put in some landmark performances over the years.

They often feature in historic moments and have performed for some of the most powerful people in the world.

Sometimes the audience has been over a million; sometimes it has only been a handful of people – all have been remarkable in their own way.

Perhaps the greatest highlight for the band was playing in front of The Pope when he visited Ireland in 1979. There were more than a million people crowded in Phoenix Park in Dublin for the Pope’s visit. The Chieftains were the opening act to get the day’s events going.

It’s not every day you get to be a warm-up act for The Pope.

Playing on the Great Wall of China

In 1983, The Chieftains became one of the first western groups to perform in China. They were invited by the Chinese authorities as part of a cultural exchange visit.

They performed on the Great Wall and were joined at one point by Chinese musicians from the Chinese Broadcasting Art Group.

The invitation from the Chinese reinforced The Chieftains reputation as musicians of international standing. The Great Wall of China

Capitol Hill with Kennedy and O’Neill

In 1983,  The Cieftains were offered a great honour in America, even more so because they weren’t American. 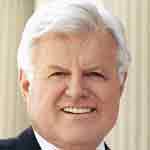 The Chieftains became the first band to perform in the Capitol Building in Washington DC.

They were invited by the former speaker, the charismatic Irish-American, Tip O’Neill, and Senator Edward Kennedy.

Pink Floyd and the Berlin Wall

In 1990, The Chieftains joined Roger Waters of Pink Floyd in Berlin for his performance of The Wall, to celebrate the fall of the Berlin Wall.

Memorial Service for the victims of 9/11 terrorist attack

In 2002, The Chieftains performed at a memorial concert in New York for the victims of 9/11.

Paddy Moloney was given special permission to visit Ground Zero. He played a lament on his tin whistle for the rescue teams who were working on the site.