Chloë Agnew is an award winning young Irish singer who is currently a member of the group, Celtic Woman.

She is known for her ‘angelic’ voice and is also an accomplished musician. She plays piano, guitar and recorder.

She was born in Dublin and both her parents were professional performers. Her father David Agnew is a celebrated oboe player and her mother is Irish entertainer, Adele “Twink” King.

First appearance at one month old When Agnew was just four weeks old she appeared on her mother’s TV show. When she was six she made a second appearance and sang a song. It was the first time she performed for a large audience.

She told BeliefNet.com: “Irish music is bred into us from the day we are born. Looking back to our ancestors and our heritage… (Irish people) have a song for everything–for drinking, for depression, for famine. I remember a song growing up that was for milking the cows.”

When she was nine she represented Ireland at the first International Children’s Song competition. It was held in Cairo and Agnew won the Grand Prix with a song called, The Friendship Tree. She spent the next four years performing pantomime with her mother at the Olympia Theatre in Dublin.

In the meantime she also recorded a song for charity. In 2000 she had been moved after watching a documentary about children who had lost their parents. She approached music producer David Downes as she wanted to record a song to raise money for the children of Afghanistan.

She said: “I saw an ad on TV for the children of Afghanistan and for the children in America who had lost their families, I remember thinking about it for weeks, just being moved and changed by it. I knew that singing was the strongest thing I could do so I asked David if I could record a single with the profits going to charity.”

Downes helped her record a song called Angel of Mercy which featured on an album, This Holy Christmas Night. By 2001, the song had raised more than £20,000 for the Afghan Children’s Charity Fund. 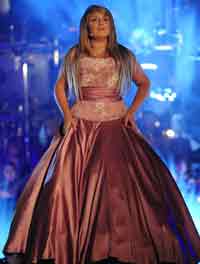 Following the success of her charity song she was signed up to the Celtic Collections record label. She released her debut album, Chloë, when she was just 13. Her second album, Chloë: Walking in the Air, followed two years later in 2004.

2004 was also the year that she joined the stage show, Celtic Woman. She was one of the show’s four lead vocalists and the youngest member of the group.

The show featured Irish female performers singing a mixture of traditional and contemporary songs. The initial show at the Helix in Dublin was such a success that it went on tour across the United States. Since that first American tour, the group released five albums and toured the world several times.

Agnew says she is really enjoying her time with Celtic Woman. She said: “I’ve gotten to do things I just never dreamed I could do; travelling the States and meeting so many people.”

In the future she would like to study for a degree in child psychology but for now music continues to take up most of her time.