Cór Ainglí – a choir of angels 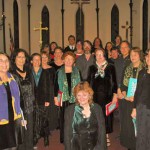 It truly was a dark and stormy night – a night of lashing rain and howling winds that caused the electricity to flicker, and made folks grateful for the old-fashioned gas lamps in the nave of the old church.

Then one of the ushers stuck his head through the stage door, flashed a grin, and said “get ready…we’re sold out!”

Galway? Derry? No. This was the first public performance of Cór Ainglí, North America’s only dedicated Irish Gaelic Christmas choir, based in Santa Cruz, California. And, despite very “un-California-like” weather, the group actually sold out not one, but two venues that weekend in 2006…a pattern that has continued now for five years.

Cór Ainglí (“Angelic Choir” in Irish, from the first line of the Irish version of the carol “Angels We Have Heard on High”) is the creation of renowned Irish singer, songwriter and teacher Mary Mc Laughlin. Mary fell in love with Irish singing as a young girl, growing up in her hometown of Omagh, Co. Tyrone, and attending Irish-language summer schools in the Donegal Gaeltacht.

Although traditional Irish sean-nós (“old style”) singing is typically performed solo (and even when sung in a group setting, is rarely harmonized), Mary could always “hear” the harmonies lurking behind the melodies.

Mary’s musical journeys took her from Ireland to London, and eventually to the U.S. She has recorded three solo CDs – “Daughter of Lir,” “Crystal Shoe,” and “A Gaelic Christmas” – as well as a collaborative CD, “Celtic Requiem,” with guitarist William Coulter. She’s also written two books on Irish singing: “Singing in Irish Gaelic” and “A Gaelic Christmas Songbook.”

When Mary records her CDs, she layers the vocal tracks, so her own voice provides both melody and harmony. When she began to plan her “Gaelic Christmas” CD, however, she decided to form her own SATB (soprano, alto, tenor, bass) choir, so that the choral arrangements she was writing (and recording for the CD using her track-layering technique) could also be performed live.

One thing that is unique about Cór Ainglí (other than the fact that they sing in a language not often heard outside of Ireland) is that many of the singers don’t read music. Looking for people with an interest in singing in Irish, Mary drew heavily from those steeped in folk traditions, where music reading isn’t always a necessary (or even a desired) skill.

Although sheet music is supplied for those who do read, the parts are largely taught by rote and reinforced by practice CDs that every choir member receives. Mary makes a point of telling prospective members that they don’t need to be able to read music to sing in the choir…the important thing is the ability to carry a part and to blend.

Phonetic method of singing in Irish

Another interesting fact is that, at this writing, there are only three people in the choir other than Mary who actually speak Irish. A few others are in various stages of learning the language, but the vast majority learn the words to the songs via the phonetic method that Mary developed for her book “Singing In Irish Gaelic.” 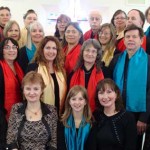 The choir’s repertoire consists of a mixture of traditional Irish carols — many of which are unfamiliar to American audiences — and more familiar European and American carols that have been translated into Irish.

In recent years, Mary has also added some 13th century Latin chants to the mix, a legacy of her Masters Degree in Gregorian Chant and Sacred Irish Music at the internationally acclaimed Irish World Music Academy at Limerick University.

Instrumentation typically includes harp, guitar, fiddle and/or flute, and a variety of percussion instruments, though some pieces are performed a cappella or with piano accompaniment.

A guest act, frequently the women’s vocal ensemble “Zambra” , provides additional variety, as well as an “ear break” from the flow of Irish. Read more on Cór Ainglí.

Find out how you can feature in Irish Music Daily’s Video Showcase.

See our series of articles on singing in Irish by Cór Ainglí member Audrey Nickel. Click the links below.

Part 1 “Singing in Irish: yes – it’s a language”
Part 2 “Singing In Irish — The Sean-Nós Tradition”
Part 3 “A listener’s guide to irish song: a taste of sean-nós”