Damian McGinty is a singer and actor famous for his role in the smash TV series Glee as well as being a former member of the vocal group Celtic Thunder.

As well as Irish music, McGinty has a real love for big band and swing music. Some of his favourite artists come from the classic era of the big band including Frank Sinatra and Dean Martin. He is also a huge fan of contemporary stars such as Michael Buble. 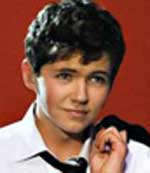 McGinty was born in Derry, Northern Ireland and showed a talent for music from an early age. He won his first competition when he was just six. As the years went by McGinty continued to grow as a singer. In 2006 he won a major competition and was invited to sing at the Millennium Forum for Derry City football team as well as a number of other concerts.

In 2007, McGinty recorded a charity CD which caught the attention of Sharon Browne and Phil Coulter who were behind the successful vocal group Celtic Thunder. They were suitably impressed and invited McGinty to audition for the show.

McGinty was a hit at the auditions and was offered a part in the upcoming show. Although he was just 14 years old his ‘boy wonder’ role became an integral part of the show.

With Celtic Thunder, McGinty completed four coast to coast tours of the US and Canada. They performed for around 400, 000 people and sold over one million CDs and DVDs. His final tour with Celtic Thunder was Storm in 2011. He played the role of the Young Buck who fell asleep when he should have been guarding treasure. The treasure was stolen, showing that while the Young Buck wanted to be seen as a man he was still irresponsible like a child.

When McGinty was 18 he took part in the reality show, the Glee Project. The show was a competition to find a singer who could take part in the hugely popular show, Glee.

An estimated 40,000 contenders initially applied for the competition via a MySpace audition search and McGinty eventually became one of the shows two winners. McGinty was delighted to win the competition. He said: “After the start I had in the competition, I really struggled and struggled to fit in. I fought and I battled and after my performance in the bottom 3 against Cameron and Emily everyone expected me to go home and I turned it around. It’s been an absolute honour”.

He left Celtic Thunder the day after he won the Glee Project so he could concentrate on his role in Glee. He described his departure from the group as ‘bittersweet’.

He was given a seven episode story arc on the show. His character, Rory Flanagan, was an Irish exchange student. He was so popular with fans that McGinty was given a 10 episode extension on the show.