Few Irish songs have spread across the world and captured the public imagination as much as Danny Boy.

History of Danny Boy
Who is the singer?
Lyrics Analysis
Danny Boy Videos
Lyrics and Chords

Its moving lyrics and searing, sublime melody have made it a favourite with audiences for the last 100 years.

Danny Boy, or the Londonderry Air as it is sometimes called, has been recorded by hundreds of major artists and inspired countless articles, books, arguments and discussions.

Who wrote Danny Boy?
It was written by the angels.
Elvis Presley

Danny Boy has not just been the preserve of Irish singers – although some of Ireland’s most renowned performers like legendary John McCormack helped to make it famous.

A list of the singers who’ve performed Danny Boy would look like a Who’s Who listing of the major pop artists of the last 100 years.

Relationship between Danny and person singing

Many prudish Victorians wouldn’t say Londonderry Air because it sounded too much like London Derriere which – if you clash the English and French languages together – gives a meaning of London Backside.
The Victorians preferred to refer to it as the Air from Londonderry.

The lyrics focus on the relationship between Danny and the person singing.

The singer is generally seen as being a wife or lover, although it can also work as a parent, either a father or a mother.

The song works with any of these relationships in mind, which makes it possible for men and women to perform it. This flexibility may have helped to make the song so popular as people can interpret it in a way that is meaningful to them.

The tune of Danny Boy was popular long before the lyrics were written and was originally known as the Londonderry Air or the Air from County Derry.

The composer is not known for certain but many attribute it to a blind Irish harpist called Rory Dall O’Cahan, who’s thought to have lived in northern Ireland in the late sixteenth and early seventeenth century.

O’Cahan’s Lament may have been original name

O’Cahan’s ancestral lands were confiscated by the British and he wrote the melody as a lament for his loss.

It became known simply as O’Cahan’s Lament and became popular with harpists and other musicians throughout Ireland. The lyrics to Danny Boy were written by Fred Weatherly who was a very successful songwriter towards the end of the 19th century.

He wrote the lyrics in 1910 but at that time he hadn’t come across the Londonderry Air and used a different melody. The song was a flop.

Weatherly realised that it needed a stronger melody, but he couldn’t find anything appropriate. Then his sister-in-law chanced upon some Irish musicians in America playing the Londonderry Air.

She got them to write it down for her and then sent it to Weatherly in the hope that he might be able to make some use of it. 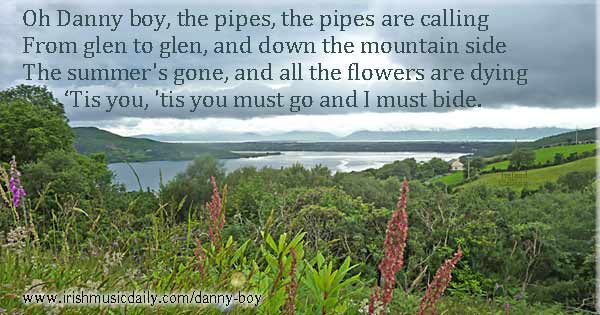 The leading singers of the day such as John McCormack were quick to record it.

McCormack’s lead was followed by most of the major singers of succeeding generations. Weatherly realised immediately that this melody would work perfectly with his lyrics for Danny Boy.

He republished the song using the new Londonderry Air and it was an instant success.

Artists like Mario Lanza took the up the baton. It then passed to people like Bing Crosby, Judy Garland, Elvis Presley, Art Garfunkel, Tom Jones, Sinead O’Connor and countless others.