Eleanor McEvoy is a singer songwriter who wrote the title track of the best selling Irish album of all time.

She has gone on to release several albums and her ever evolving style has earned her many glowing reviews from critics over the years.

She was born in Dublin in 1967 and started playing the piano at the age of four. When she was eight she started to play the violin.

She got an honours degree in music from Trinity College, Dublin. While she was at college she worked in various music clubs.

After she graduated she went to New York where she spent six months busking.

She played in the RTÉ National Symphony Orchestra for four years from 1988-1992. When she left she began to concentrate on her songwriting.

A helping hand from Mary Black 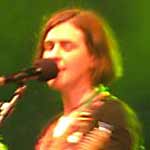 She performed in music clubs in Dublin and began to develop a big following.

In 1992, she performed a solo gig in which she sang a song she wrote herself called Only a Woman’s Heart. Mary Black happened to be in the audience and was very impressed with the song and the singer.

At the time, Black was working on an album that featured tracks from several female Irish vocalists. When she heard Only a Woman’s Heart, Black invited McEvoy to be a part of the project.

As it turned out, McEvoy’s song became arguably the most important track on the album. It was released as the lead single and gave the album its name, A Woman’s Heart.

There was more good news for McEvoy when the album became the best selling Irish album in Ireland in the country’s history.

Mary Black wasn’t the only influential person to be impressed by McEvoy’s performance. At another gig, she caught the eye of Tom Zutaut from Geffen Records. Zataut offered McEvoy a worldwide recording deal.

Style changed in her second album

In 1996 she released her second album, What’s Following Me. It was recorded with Columbia records and had an edgier, grungy sound. McEvoy commented on her changing style: “I love the art of songwriting, and I love fusing different genres of music”

The lead single from the album, Precious Little, became a big hit in the States and McEvoy embarked on a huge tour. She also appeared on various TV and movie soundtracks including Pierce Brosnan’s ‘Nephew’.

Unfortunately the album wasn’t as popular in Ireland as it was in the States. Many of McEvoy’s early fans were not keen on her heavier sound and wanted more songs like Only a Woman’s Heart.

Going from strength to strength

McEvoy’s evolving style was again apparent when she released her third album, Snapshots, in 1999. She wanted the album to be more “song oriented” and drum loops were used throughout the album.

Fans and critics on both sides of the Atlantic were hugely impressed. The Sunday Times In the UK declared it was her strongest album to date, while the Boston Globe said “McEvoy’s album is a gem”.