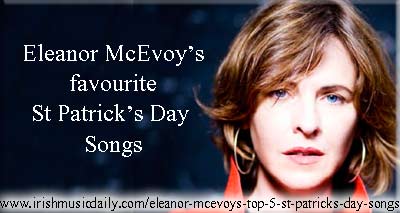 This is a song of mine that I wrote about anorexia. I was amazed to hear that it’s used in treatment centers to treat the disease – this meant a lot to me. I get more letters and messages about this song than any other song I’ve ever written. I found this video that someone made to the song on youtube. It’s very very moving.

This is a blues I wrote about contemporary Ireland. It was on my album “I’d Rather Go Blonde”. We had just seen massive corruption and hypocrisy in our banks, our government and the church. It seemed like every single Irish institution had let us down. Growing up in a strict Irish Catholic household in Dublin, the language of the church was part of my vocabulary – so I used that in this song to highlight the duplicity of the church as I saw it at that time.

I find it hard to believe that it’s 22 years since I wrote this song. As I travel the world, I’m always completely blown away to hear the crowd singing it back to me, be it Australia, America, Poland, Norway, Taiwan, Singapore, Malaysia. People tend to think of it as a slow song, quite ‘down’ but in actual fact it’s tempo is quite fast, and I’ve always hoped that people would feel uplifted after hearing it – as it’s quite cathartic. Music to me can be such a healing thing. This clip is from a performance on Ireland’s iconic Late Late Show.

This is a song that I co-wrote with the wonderful Dave Rotheray (ex Beautiful South). It’s a song about Alzheimers which is so prevalent in our world today – but not written about in song very much. Throughout the song, the protagonist is wrestling with the conflicting emotions you feel when the person is there on the one hand, but yet so absent on another level.

This is a song that i wrote for the 20th anniversary of “A Woman’s Heart”. I was looking at all the girls and how diverse they all were and was thinking that it’s kind of like “The Traveling Wilburys” where you had Bob Dylan, Roy Orbison, Tom Petty etc. And yet it really worked with them all singing and playing together. So I wrote a song that would work for Mary Coughlan, Sharon Shannon, Gemma Hayes, Hermione Hennessy and myself. The version in this video features Sharon, Mary and myself.