I Know Where I’m Going

I Know Where I’m Going tells the story of a young woman who has everything she could want except the man she loves.

I Know Where I’m Going Videos
Lyrics and Chords

It’s been performed in Ireland since at least the 19th century and probably originates from Co Antrim, although it has also been linked to Scotland. 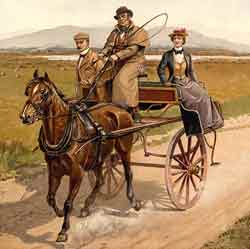 The song begins with an air of certainty. The young woman knows who she loves and she knows where she’s going. The only problem is that “the dear knows” who she’ll marry.

The phrase “the dear” is a colloquial expression from the north of Ireland which simply means “who knows” or “goodness knows”.

We discover that the young woman is wealthy, with stockings of silk and a ring for every finger. The only thing she doesn’t have is the man she loves, her handsome Johnny.

She tells us that some people find him dark. The song originally used the word black, which in the north of Ireland in the 19th century meant dour, surly or lacking in social graces. It would make Johnny into a kind of Mr D’Arcy character from Pride and Prejudice.

The word black has since given way to dark, partly because it better expresses the sense of moodiness to modern audiences and partly because it avoids people mistakenly thinking there might be racial overtones.

Dark or bonny – it’s in the eye of the beholder

The word “bonny” carries a lot of connotations. It not only means good looking, but also suggests healthy and of a pleasant disposition. It means the young woman sees her handsome Johnny in a very different way to other people.

The appeal of the song lies not only it what it tells us but in what it fails to tell us. We know she’s unsure of whether she can marry the man she loves but we don’t know why. Does he not love her? Do her family disapprove? She says she would give up her feather beds to be with Johnny. This suggests he would not have the money to provide such luxuries for her so perhaps wealth and social status are the problem.

I Know Where I’m Going was first published in 1909 in Irish Country Songs, collated by Herbert Hughes. Hughes first heard the song in Co Antrim.

It’s unclear so listeners can fill in the gaps in whatever way appeals to them. This helps to give the song a more universal appeal.

I Know Where I’m Going has remained popular over the last hundred years and has been recorded by a wide range of artists from all over the world including Judy Collins, Harry Belafonte, Peg and Bobby Clancy, Odetta, Julie Andrews and Cerys Matthews from the pop group Catatonia.