They formed in 1998 when producers for PBS television were looking to create a show called ‘The Irish Tenors’.

It was the brainchild of Daniel Harte and Bill Hughes who, after seeing the Three Tenors (Luciano Pavarotti, Jose Carreras and Placido Domingo) perform at the Cannes festival, felt it would be interesting to combine their singing style with Irish music. The Irish Tenors enjoying the show

The Irish Tenors – Live in Dublin

Harte and Hughes decided to put together a group for a special show and looked to Finbar Wright to take the lead. However, Wright was contracted to Sony BGM at the time and was unable to take on the role.

Harte and Hughes then turned their attention to Canadian singer, John McDermott. McDermott accepted their offer. Anthony Kearns and Ronan Tyron were then recommended by vocal coach, Dr Veronica Dunne, and the line-up was complete.

In 1999, they performed a concert in Dublin which was shown on the PBS channel in the United States. A live album of the concert, The Irish Tenors – Live in Dublin, was also released in 1999.

The group were hugely popular and another special was planned to take place in 2000. However, McDermott had to leave the group after his mother died. He was unable to commit himself to The Irish Tenors and left shortly before the concert was to take place.

That year the group released their second live album, The Irish Tenors – Live in Belfast. 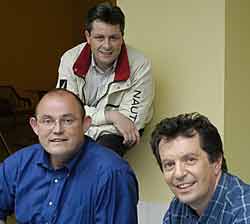 In 2001, The Irish Tenors performed their third special. This time the concert was in New York’s Ellis Island, the gateway to the United States through which thousands of Irish immigrants passed in the early part of the 20th century.

The event was hosted by the Irish-American Hollywood star, Martin Sheen, who joked about The Irish Tenors: “once they’ve started, you can’t shut these guys up!” It was a big success and the album, Ellis Island, was named in the Billboard Heatseeker’s Top Ten Best of 2001.

The band continued to work tirelessly, performing and recording. They released an album every year. In 2002 they released a ‘greatest hits’ package, The Best of the Irish Tenors. This was followed in 2003 by We Three Kings, in 2004 by Heritage, and by Sacred in 2005.

McDermott returned to the studio with the group to record part of the Sacred album. It was the last release from the Irish Tenors for four years.

The Irish Tenors and friends

They kept themselves busy though. In 2007, they were invited to perform at Charleston in South Carolina, where the local Legislature issued a ‘Proclamation’ welcoming them to the State.

In 2008, the group returned to Ireland to present a television series for RTE called The Irish Tenors and Friends. On the show the group invited guests such as Finbar Furey, Sharron Shannon, Andrew Lloyd Webber, and Paul Carrick to perform with them.

In 2009, they released a new album, Ireland. This was followed up by a Christmas album, simply titled, Christmas, in 2010.