Luke Kelly and The Dubliners, along with a few other groups such as the Wolfe Tones and The Clancy Brothers and Tommy Makem, helped to give traditional Irish music a new lease of life in the 1960s.

At the time it was seen as old-fashioned. The Dubliners helped to change that.

They were loud and boisterous and brought Irish music into the clubs.

Their shows were energetic and they had a great sense of humour. This meant that the band enjoyed a fantastic rapport with their fans. 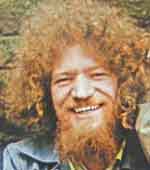 Their passion for the music was infectious. They inspired a generation of young people to get into traditional music and learn traditional Irish instruments such as the fiddle and the accordion.

Despite their early success, the band still weren’t making much money and Kelly left in 1964 to pursue his career as a solo artist. He went to London with Dierdre O’Connell who he later married in 1965. While he was in London, he took a lot of inspiration from the great Scottish singer/songwriter Ewan MacColl.

He later recorded some of MacColl’s classic songs such as Dirty Old Town, Schooldays Over and Shoals Of Herring.

Kelly rejoined the Dubliners in 1965. They recorded several albums and performed at festivals throughout the UK and into Europe, particularly Germany. They had UK hit singles with Seven Drunken Nights and Black Velvet Band.

Seven Drunken Nights was banned in Ireland for being too crude. However, it gained plenty of exposure on Radio Caroline, a pirate radio station in England. This helped to propel it up the charts.

Kelly also turned his hand to acting and appeared as King Herod in a production of Jesus Christ Superstar.

The Town Loved So Well

In the early 1970s, Kelly struck up a friendship with the great Derry songwriter, Phil Coulter. Coulter managed The Dubliners for a short period, which proved to be very fruitful for Kelly.

He recorded several of Coulter’s songs but two in particular stand out as favourites with audiences across the world. The first was Scorn not his Simplicity, about Coulter’s son who had Downs Syndrome.

Kelly sang the song with great power and sensitivity and it became one of his trademark tracks. The other Coulter classic was The Town I Loved So Well, about how the Northern Ireland conflict had devastated Coulter’s home town of Derry. This became another show stopper in the Kelly and Dubliners’ repertoire.

Kelly was also closely associated with the Patrick Kavanagh song, Raglan Road, and played a huge part in making it so popular that is has become a standard on the Irish traditional circuit.

Many other songs associated with Kelly such as The Button Pusher, The Springhill Disaster, Joe Hill, God Save Ireland and Alabama 1958, were inspired by his political beliefs.

Performing even as illness took its toll

In 1980, Kelly collapsed on stage while performing with The Dubliners at the Cork Opera House. He was diagnosed as having a brain tumour and had to undergo surgery.

The operation was a success and Kelly carried on working but his health continued to deteriorate. He started to forget lyrics when he was onstage and he felt weak.

In 1983 he had to cancel a tour of Germany and was admitted into hospital.

He was allowed home to spend Christmas with his family but just over a month later he died in hospital in Dublin on 30th January 1984 aged just 44.

He is buried in Glasnevin Cemetery. The inscription on his grave reads simply, Luke Kelly – Dubliner.

Kelly was regarded by many as the best folk singer of his generation.

He will be remembered for his soaring voice and the great power and passion he could bring to his performances, coupled with great subtlety and finesse.

Nearly 30 years after his death, he is still a revered figure in Ireland and in folk music circles.