Londra had starred in several musicals in Ireland and the US and was now playing the role of Jesus in the passion Symphony.

At rehersals, Londra often drifted into his soft Wexford brogue, much to the amusement of the rest of the cast.

John Debney, who composed the symphony, joked: “’I don’t know if you saw the movie Michael, but James Caviezel was not from Wexford!” Londra toned down the accent and despite early teething problems, the show was a great success. Londra performed with the production across the world, including a performance in the Vatican. 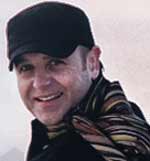 Londra was so happy with his success in the US that he moved to Chicago. He released his debut solo album, Celt, in 2006. The album featured a number of songs that he had co-written.

In 2009, Londra featured on the album, Arias Ancora, alongside stars such as Luciano Pavarotti, Kathryn Jenkins, Eva Cassidy, Sarah Brightman, Nana Mouskouri and a host of other top vocalists.

That year he also released a Christmas album. It was called Beyond the Star and it nicely complemented Londra’s annual holiday tour, ‘A Celtic Yuletide with Michael Londra’.

He released his third album, The Road not Taken in 2011. That year he starred in the show, Beyond Celtic, which was a special for PBS television.

It was a huge success and was shown over 400 times in the States and was nominated for an Emmy. The recording of the concert was released on CD and DVD.

In 2012, Londra was named Best Irish Tenor at the Irish Music Association Awards. He also became an ambassador for Wexford.

Irish President Michael D. Higgins said “Michael Londra is one of Ireland’s top tenors, having made unique contributions of major significance to Celtic music… His enormous contribution to Irish Arts is acknowledged as is his vital role in spreading Irish culture internationally.”

In 2013, Londra took part in Irish celebrations to mark the 50th anniversary of President Kennedy’s visit to Ireland. He wrote the song, Song for John, especially for the occasion. He also sang at the graveside of JFK.