Mountains of Mourne Sweep down to the Sea

The Mountains of Mourne was written by Percy French who was one of the most prolific and successful Irish songwriters of all time.

The song has become so well known worldwide that it’s now one of the first things Irish Tourism sites mention when describing the beauty of the Mourne mountains and surrounding countryside.

Song is in the form of a letter back home 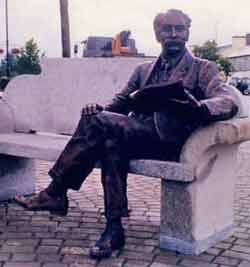 The song is written as a letter from the singer in London to a friend called Mary Macree back home among the Mountains of Mourne.

This allows an easy conversational style in which the singer can comment on the sights and fashions of the city and answer questions from Mary.

French makes the best of this very clever technique to get both humour and pathos out of the innocence of the singer’s observations.

Gangs of them digging for gold in the street

In the opening verse, the singer describes seeing gangs of men digging in the streets. He says they’re digging for gold, which suggests he’s something of an innocent lost in the big city, but he may not be as naïve as he seems.

He qualifies the statement by saying “at least when I asked them that’s what I was told,” which suggests that the singer is already suspicious about the ways of London and its people. He soon starts to see through them in other ways.

How the fine ladies of London were dressed

Mary had asked how the women dressed in London. The singer replies with some sense of scandal that when going to a ball “they don’t wear a top to their dresses at all”.

They were no doubt tame by the standards of today but to the singer, they were so outlandish that he wasn’t sure whether they were “bound for a ball or a bath”.

The verse ends with a gentle humour as he adopts a typically colloquial Irish speech pattern and says:

“Don’t be starting those fashions now Mary Macree,
Where the mountains of Mourne sweep down to the sea.”

As the whole population of London looked on

As in any letter, there’s news of people he meets from back home. Young Peter O’Laughlin is now in London and foreman of a gang of men building and repairing the roads.

The singer meets him by chance and is impressed as O’Laughlin stops everyone working with one wave of his hand as he takes time out to chat. The singer mentions that as they talked “the whole population of London looked on”.

This is a gentle reminder that to someone from a tiny village in Ireland, a streetful of people in London would look like an enormous crowd.

As they are two young men chatting, they naturally refer to the women to be seen in London who have “beautiful shapes nature never designed”.

The men are not necessarily impressed, however. O’Laughlin comments that if you venture to kiss one of those women on the lips then “the colours might all come away on your lip”.

The song ends with them attesting that they would prefer the natural beauty of the women to be found where “the mountains of Mourne sweep down to the sea.”

The lyrics to the Mountain of Mourne are a little too sentimental for some people’s tastes which is why it has never really entered into the mainstream folk song tradition of Irish music.

This is a shame because the song is brilliantly written and a lot of what some people take as too much sentimentality is in fact ironic and tongue in cheek. It deserves greater critical acclaim.

The melody to the Mountains of Moune

The lyrics to the Mountains of Mourne are set to the melody of an old Irish traditional folk song called Carrigdonn.

The same tune was used by the Irish poet and songwriter, Thomas Moore, for his song Bendemeer’s Stream.

Recordings of the Mountains of Mourne

The song has been largely ignored by mainstream Irish folk artists but has been widely covered as might be expected by performers with more of a country and pop music background.

Celtic Thunder recorded The Mountains of Mourne on their debut album, called simply Celtic Thunder, and brought the song to a new generation. American singer songwriter Don McLean also recorded it although he called it, Mountains O’Mourne.

Finbar Furey recorded it on Chasing Moonlight, Love Songs of Ireland. It has also been recorded by several other artists including Irish Mist, Charlie Landsborough and Jim Brannigan.