Moya Brennan is considered by many to be the ‘First Lady of Celtic Music’. She is a folk singer known for her song writing and harp playing. Her haunting voice has become synonymous with Irish music.

She has sold over 20million records and is the sister of fellow Irish superstar, Enya. Despite her Celtic roots a lot of her music is seen as being ‘New Age’.

Brennan’s career in music has spanned five decades and she has worked with some of the world’s top artists and provided music for some of the best known movies of all time.

Brennan comes from a musical family Brennan was born in Gweedore, Co Donegal. She comes from a musical family and was the eldest of nine children. Her Father played in a cabaret band and her mother was a music teacher. Brennan would often perform with her father’s band when she was a child.

As a youngster she was always performing. She had a number of roles in pantomimes at her local theatre and would even sing with her siblings at her local pub.

She went to Dublin after leaving school to study harp, piano and singing at the Royal Irish Academy of Music.

She forms Clannad with family members

In 1970 her professional career in music began when she joined two of her brothers and two of her uncles to form the band, Clannad.

The band breathed new life into traditional Irish songs and over the years their reputation grew and they were believed by many to be one of the best traditional folk groups in the world.

Clannad won numerous awards including a BAFTA, an Ivor Novello and a Grammy. Brennan recorded 17 albums with the group including Magical Ring which brought chart success for the group in the early 1980s. Many folk music fans credit Clannad with creating contemporary Celtic music.

Brennan embarked on her solo career in 1992 with the release of her debut album, Máire. In 1995 her second album, Misty eyed Adventures followed. Three years later she signed to World Records and released two albums, Perfect Time and Whisper to the Wild Water.

Whisper to the Wild Water was nominated for a Grammy in 2001 for best New Age album. New Age is a label that Brennan has not always been comfortable with as she sees herself more as a Celtic singer.

Indeed a number of her songs are inspired by her Catholic religion and are about maintaining a relationship with Jesus and Mary.

Brennan performs in front of millions 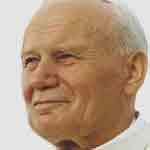 In 2000 Brennan sang in front of the Pope and millions of pilgrims in Rome at World Youth Day. It was the largest ever gathering to take place in the Northern Hemisphere with 2.1million people present. She released her Autobiography, Other Side of the Rainbow, in the same year.

In 2003 she released a new album, Two Horizons. She also teamed up with dance producer, Chicane in an unlikely collaboration. Brennan provided vocals for the song, Saltwater, which ended up being used in adverts to promote tourism in both Ireland and Scotland.

Chicane is not the only big name artist that Brennan has worked with over the years. She has collaborated with some of the biggest names in music such as Bono, Van Morrison, Robert Plant, Michael Crawford, Shane MacGowen, Paul Young, Ronan Keating, The Chieftains and Joe Jackson.

Brennan has also contributed music to the soundtracks for blockbuster movies such as Titanic, King Authur and To End All Wars.

“I think Moya has one of the greatest voices the human ear has ever experienced.”
Bono

In 2004,Brennan performed for US President George W Bush at Capitol Hill when he was entertaining Irish dignitaries.

In 2006, she released a Christmas album titled An Irish Christmas. She followed it up a year later with the album, Signature, which was a personal album that she said was a collection of snapshots of her life. The album featured several choruses and backing vocals in Brennan’s native language.

Over the following years, Brennan recorded a lot of music for charities and provided guest vocals for other artists including for Grand Canal ‘s track, Green for Gold, which was Ireland’s official Olympic song for 2008.

My Match is A Makin’

She also recorded a live album, Heart Strings, with the Royal Liverpool Philharmonic Orchestra and Julie Feeney. She went on a long European tour visiting the UK, Germany, the Netherlands and Ireland.

She released a new studio album in 2010, My Match is A Makin’. It was recorded with Cormac de Barra who is the harp player in her live band. She also headlined the Atlanta Celtic Christmas concert which is an annual celebration of Irish and Scottish music and dance.

In 2003 , she became a goodwill ambassador for the Christian Blind mission. She visited places like Congo-Kinshasa, Kenya and Rwanda. She and her group had to flee Congo-Kinshasa because of civil unrest but she returned in 2005 when she airlifted three local children from an isolated jungle.

She made a TV documentary of her time in Congo-Kinshasa and kept diaries of her visit to Rwanada. She has also visited Brazilian shanty towns where she has performed fund raising events.

She has also spent a lot of time working with charities that help people with alcohol or drug problems and abused children. Throughout her career, Brennan has been concerned about pollution and the environment and has always raised awareness of the issue.