Bob Dylan is to be awarded the Presidential Medal of Freedom – one of America’s top honours. 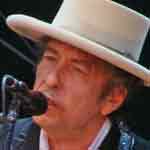 The singer-songwriter was highly vocal in the US civil rights and anti war movements in the 1960s.

This year he is one of 13 people, including Madeleine Albright, the first female Secretary of State, astronaut, John Glenn, and physician and epidemiologist, William Foege, to be chosen to receive what is the highest civilian honour in the US.

Dylan has been selected for his significant impact on American culture over the past five decades.

President Barack Obama announced the award recipients on Thursday. He said: “These extraordinary honorees come from different backgrounds and different walks of life, but each of them has made a lasting contribution to the life of our Nation.

They’ve challenged us, they’ve inspired us, and they’ve made the world a better place. I look forward to recognising them with this award.”

Some of Dylan’s early work borrowed ideas from Irish music. His classic protest song, With God on our Side, was influenced by The Patriot Game by Dominic Behan. His song, Restless Farewell was based on The Leaving of Liverpool.