Poguetry in Motion and Fairytale of New York

The Pogues built up a great surge of momentum with their first two albums but they stopped themselves in their tracks by refusing to record a third.

Instead they released an EP called, Poguetry in Motion.

The EP contained a song called Planxty Noel Hill. Planxty is loosely translated as ‘cheers’ or ‘thanks’.

The song title was a sarcastic response to Irish musician, Noel Hill, who had claimed that the Pogues were disrespecting the traditional folk genre and described their music as a “terrible abortion”. By now MacGowan was drinking heavily and taking drugs, and it was beginning to have a negative effect on the band.

In 1986 they released the song Haunted. It had featured on the soundtrack to Sid and Nancy, a biopic of Sex Pistols star, Sid Vicious, and his girlfriend, Nancy Spungen. It reached number 7 in the Irish charts, giving them their first top ten hit.

In 1987, they recorded The Irish Rover with the Dubliners. It was a collaboration that benefited both bands. It brought the Dubliners back into the limelight as they had started to be seen as a little old fashioned. It also gave the Pogues their first UK top ten hit, reaching No 8 in the singles chart. 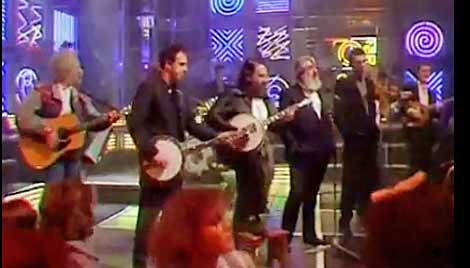 The Pogues and The Dubliners performing together

In 1988, they finally released their third album, If I Should Fall From Grace With God. It was worth the wait and contained Fairytale of New York, the world famous duet featuring MacGowan with Kirsty MacColl.

The song was voted the best Christmas song ever by music channel, VH1 in the UK.

The album also reached number 3 in the UK charts and saw the Pogues venture into other genres of music such as Jazz and Spanish folk for the first time.

Despite the success of the album, the band were becoming more and more dysfunctional because of MacGowan’s behaviour. They were due to tour America with Bob Dylan in 1988 but MacGowan missed the opening dates.

Peace and Love and the sacking of Shane MacGowan