My name is Tara O’Grady, and when you say that in New York City, the common response is, “Nice Jewish name!” or, “So, you’re Italian then?” Yes, we New Yorkers are so witty. That’s how we survive.

My mom left Donegal in 1957 where her mother Nora was always singing in her kitchen. Once mom arrived in America, her ears were flooded with the sounds of Elvis Presley and Johnny Cash.

My dad was born in the Bronx to a Roscommon father and a mother from Waterford. He learned to play the fiddle in secondary school and always loved traditional Irish music.

So I grew up in a house filled with Elvis and the sounds of Sligo fiddlers such as Michael Coleman. I could always carry a tune with my vocal cords and my brother Tom was in his high school jazz

band, so I was introduced early on to big band swing which I absolutely loved.

My brother played clarinet, flute, alto sax and piano. But he could always perform a Celtic melody since the music of Ireland was on in the house all the time competing with his rehearsing and my singing pop songs off the radio.

I always loved the old Hollywood films, especially musicals, and when I graduated from university, I began to go to swing dancing clubs to dance and hear live orchestras.

Irish songs with an American twist

A few years ago I told a fellow musician at Lincoln Center that I could sing Danny Boy like Billie Holiday. He enjoyed my rendition and suggested that I record that song in that style.

I then thought it would be a fun project to record a bunch of Irish songs in a swing or jazz style, so I chose a few of my favorites that I used to hear often growing up in the Irish circles in NYC such as Molly Malone, The Holy Ground, Peggy Gordon, Black Velvet Band, etc.

Soundtrack of summer holidays in Ireland 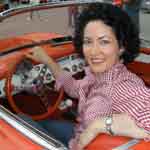 At this point I had my own band that performed jazz standards with me, and I arranged the Irish songs in a swing style for them to play. We had fun recording my first album Black Irish which I produced and released in July 2010.

The Black Irish CD surprisingly caught the attention of Nashville’s elite and they asked if I wanted to record a CD of original songs to produce with them.

So I wrote a bunch of songs on my album Good Things Come to Those Who Wait (released in April 2011), mostly in a jazz or blues style, but a few songs ended up having a Celtic flare because how can I deny the music of my family, the soundtrack of my life and my summer holidays on the farm in Donegal?

One song, called Goodnight Nora, is in a style I call a lullaby waltz. I wrote it about my grandparents, Pat and Nora, who met at a dance in Donegal and married in London. It’s a lovely duet about their life together.

It has a nice fiddle solo by Nashville fiddler Andy Leftwich. Jeff Taylor, who has recorded with The Chieftains (Paddy Moloney calls him a ‘fierce musician’) plays piano, tin whistle and accordion on that album. He has performed in Ireland many times.

November Moon is another song on the jazz album that has a Celtic flavour. Jeff Taylor’s tin whistle on that track reminds listeners of the Titanic soundtrack. I wrote that one about my mother leaving Ireland to come to America.

So even though I love the style of jazz and blues and roots music, I am still greatly influenced by the Irish music that I grew up with, especially how it influenced other folk and country music in America, because it’s a part of my own roots. So you never know, I may one day record a more traditional album.