Waltzing Matilda is undoubtedly the most famous song to come out of Australia and it has been described as the country’s unofficial national anthem.

It was written in 1895 by the Australian poet A.B. Paterson, commonly known as Banjo Paterson.

A friend of his called Christina Macpherson supplied the melody. She was taken by a tune she heard played by a band a race meeting. She remembered it and later played it for Paterson who said he thought he could provide some words for it. The tune Macpherson heard that day was probably a version of the old Scottish song, Thou Bonny Wood of Craigielea.

She was playing it by ear and from memory so it may have undergone a few changes in her hands. The words supplied by Paterson were to transform it from obscure folk tune to one of the best known songs in the world.

What does Waltzing Matilda mean?

At the time song was written towards the end on the 19th century, ‘waltzing’ was Australian slang for travelling on foot and a ‘matilda’ was a colloquial term for a traveller’s bag.

The phrase Waltzing Matilda therefore meant travelling along carrying your possessions with you in your bag. It also conveyed a happy go lucky spirit.

The story behind Waltzing Matilda

The words Paterson sat down to write told the story of a swagman, Australian slang for a traveller or hobo, who sits down by a watering hole known as a billabong to rest and make himself some tea.

While he’s there, a sheep, known as a jumbuck in Australian slang, comes to drink. The swagman seizes the opportunity to get some free food. He grabs the sheep and stows him away in his knapsack or tucker bag as it’s called in the song.

The squatter who does for the swagman

No sooner has the swagman put the sheep away when the squatter who claims to own it comes up with three troopers.

Sheep stealing could be punished by hanging at that time which explains the swagman’s desperate plight. Faced with the squatter and three troopers, he knows he has no chance of escape so he prefers to drown in the billabong rather than be taken alive and face hanging. 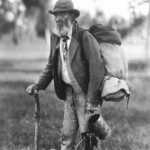 What rights did the squatter have?

Squatters were farmers who started to work to work the land without necessarily owning it.

Many were later granted legal rights but at the time of Waltzing Matilda, the squatter’s rights to be on the land and claim ownership of the sheep may have been dubious. Indeed, his legal rights may have been no greater than those of the swagman.