Rolling Stone Mick Jagger is to become a great grandfather in the New Year. He’s thrilled with the news but doesn’t like being called grandpa or granddad as it makes him feel old. 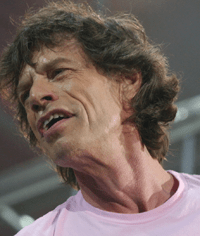 His 21-year-old grand-daughter Assisi broke the news to him earlier this month. She said he was delighted and told her, “well done”.

Assisi said: “I imagine it’s nice to be a great-grandad, although I’m not sure he likes the idea of getting old or being called one.”I call him Mick – I wouldn’t call him grandpa.”

Assisi is the daughter of Mick’s daughter Jade, who he had with his first wife Bianca. Jade confirmed the story in an interview with the Sunday Times. She said: “It is true. I am going to be a grandmother.”

She said the ageing rocker was looking forward to the birth but she doesn’t think it will slow him down in anyway, even though it reminds him that he’s getting older. Jade also refers to her father as Mick.

She said: “I think making Mick a grandfather obviously had a big impact whereas, now, making him a great-grandfather is no longer particularly fascinating.”

Jagger already has seven children and four grandchildren. He shows no sign of slowing down even though he’s now 70.

His lined face may betray his age but he he’s a sprightly as ever as he dances across the stage just as he did in 1960s. The Rolling Stones are still touring and selling out vast stadiums across the world. They recently topped the bill at the giant Glastonbury Festival in the UK.

The Rolling Stones may be the quintessential rhythm ‘n blues band but they’ve also flirted with other styles. They are fans of the Irish band, the Chieftains. In 1995, The Stones recorded Rocky Road to Dublin with the Chieftains for the Chieftains’ album, Long Black Veil. Jagger also provided the vocals for the title track.

More on the Rolling Stones and the Chieftains