In 1997, The Corrs released their second album, Talk on Corners.

It went on to become their most famous album but like their debut, it wasn’t an instant hit.

They remixed the songs, What Can I Do, So Young and Runaway, and rereleased a special edition of the album. It became a worldwide hit. 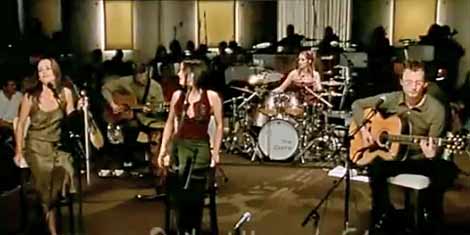 It was so popular in the UK that it helped to bring their debut album back into the charts. Talk on Corners was the biggest selling album of 1998 in the UK.

They became only the second band, after the Beatles, to have two albums in the top two of the UK charts, with Talk on Corners and Forgiven Not Forgotten.

In 1998, they joined Luciano Pavarotti in Modena, Italy for the Pavarotti and Friends for the Children of Liberia charity concert. The bill also included Stevie Wonder, Celine Dion, Jon Bon Jovi and the Spice Girls.

The band’s third studio album, In Blue, followed in 2000. It was more mainstream than their previous work and featured the single, Breathless. The album was another hit for the band and reached number one in eight countries including Ireland, the UK, Germany and Spain.

Sadly, the Corrs’ mother died during the production of the album. Her funeral was attended by many, including Bono, Larry Mullen, Paul Brady and Brian Kennedy. The album featured the song, No More Cry, which Andrea and Caroline wrote for their father to help him cope with his wife’s death.

On stage with Bono and Ronnie Wood

In 2001, the band released their greatest hits album which achieved platinum status in Australia. They also hosted a live concert at Ardmore studios where they were joined by Bono and Ronnie Wood. The performances were released as a live album – VH1 Presents: The Corrs, Live in Dublin.

Their next album, Borrowed Heaven, was released in 2004. It was well received by fans as the group had returned to their Celtic folk pop roots. The album reached number one in Ireland and was a hit all over Europe.

Their final album to date was Home which was released in 2005. It was a collection of traditional Irish songs which the band dedicated to their mother.

The band are currently on a break period as Andrea pursues a solo career and Jim, Sharon and Caroline all have families to raise.