The trial and execution of Kevin Barry

On 20th October, 18-year-old Kevin Barry faced trial by court martial for his part in a military ambush in which three British soldiers were killed.

Since his capture a few months earlier, a debate had raged in Ireland and Britain as to whether Barry should be given the status of prisoner of war. The British refused and put him on trial for murder. 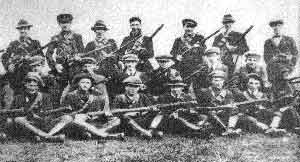 Hogan’s Flying Column during the Irish War of Independence

Brigadier General Onslow, who headed up the nine officers conducting the trial, perhaps mindful of Barry’s youth, urged him to reconsider and explained to him that he was being tried on a charge of murder and that he was in a “perilous situation.”

Barry did not reply.

He was found guilty on three charges of murder. This was in spite of the fact that Barry’s gun had jammed and was of a different calibre to the bullets taken from the bodies of the soldiers.

Legal experts explained to the court that it was not necessary to prove that he fired a bullet; the law only required for it to be proved that he took part in the ambush. This was because all the members of the ambush group were considered guilty of murder whether or not they fired the fatal bullet.

Having been sentenced to death, Barry is said to have requested to be shot rather than hanged. It’s unclear to what extent he pursued this but it led to the famous line in the Kevin Barry song which resonated so much with Irish nationalists: “Shoot me, shoot me like a soldier, do not hang me like a dog.”

A friend who met Barry in prison shortly after the death sentenced was passed said: “He is meeting death as he met life with courage but with nothing of the braggart. He does not believe that he is doing anything wonderfully heroic. Again and again he has begged that no fuss be made about him.
Barry reportedly said: “It is nothing, to give one’s life for Ireland. I’m not the first and maybe I won’t be the last. What’s my life compared with the cause?”

Appeals for clemency are denied

The death sentence outrage public opinion and made many people even more determined to pursue Irish independence.

There were numerous calls for clemency, not only from Ireland but also America and even from some parts of Britain.

The authorities refused to yield and Barry was hanged in Mountjoy Jail on 1st November 1920. He was buried in a plot within the grounds of the prison.

A martyr to Irish nationalism

Barry’s death led to a wave of revulsion throughout Ireland. He was seen as a hero and a martyr for Irish freedom.

The story of his torture and execution helped galvanise public opinion and strengthened the calls for Irish independence. Less than a year after Barry’s death, in July 1921, the Irish and the British agreed a ceasefire. The Anglo-Irish Treaty, which brought British rule to an end in most of Ireland, was signed in December 1921.

These were momentous events which were on course to happen anyway, but there’s no doubt that Barry’s death played a significant part in swaying public opinion in favour of independence.