The song is also known as Let the Grasses Grow and The Real Old Mountain Dew. The Irish had brewed poitin for centuries but had to work in secret to avoid paying heavy taxes imposed by the British Government.

Poitin distillers were hunted by the authorities

Poitin is Irish for small pot

The illicit distillers had to keep their wits about them to stay one step ahead of the authorities, especially when bounty hunters were introduced in the 18th century.

The Catholic Church was also opposed to poitin, as were the Irish Government following independence.

However, despite all the efforts of the various authorities throughout the centuries, the illicit poitin industry continued to thrive and is still in existence today.

There is a campaign to have poitin legalised but the Irish Government shows no signs of relenting. 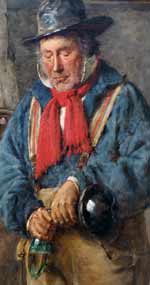 The second verse begins with a reference to a “neat little still” at the foot of the hill.

One of the advantages the illicit distillers had over the authorities was that poitin was relatively easy to make and stills could be set up and dismantled quickly.

It meant the outlawed distillers could be up and away at the first sign of trouble, and then set up in business again at another location.

Away with pills, it’ll cure all ills

St Pat’s Poitin
Poitin drinkers will tell you that the drink was created and sanctioned by St Patrick. He’s said to have run out of altar wine and so distilled some poitin as a quick replacement!

Many enthusiastic drinkers will justify their habit by referring to the medicinal powers of their favourite tipple.

Poitin drinkers are no different and the song uses this idea for some lighthearted humour as it insists that there’s no need for pills because poitin, or mountain dew as it is known, is so powerful that it will cure all ills.

And it does so without favour or prejudice, so it doesn’t matter whether you’re a pagan, a Christian or a Jew. Poitin does not discriminate and will work for all. The word gougers in the first verse is an Irish slang term for hard drinking men who weren’t afraid to stray outside the law occasionally, especially for such a tempting cause drinking whiskey.

Nowadays, they might be referred to as “the lads” in Ireland and the UK, or perhaps as “good old boys” in the US.

In some versions of the song the word gouger is replaced by police.

The idea then is to give them the slip and carry on drinking.

Mountain Dew was written for a play

The song was first published under the title of The Mountain Dew. It was written for a play called The Blackbird, which was produced in Dublin in 1882.

The lyrics were by Edward Harrigan and the music was attributed to David Braham. However, the Rare Old Mountain Dew has the same tune as a much older song called The Girl I Left Behind Me or Brighton Camp.

It’s likely therefore that Braham merely arranged the music for the song rather than actually wrote the melody.

Alcoholic church bells
Poitin was once found in a church Kilkieran so the priest was fined £100 – a huge sum for the day. The money was used to pay for the Bells of Tuam Cathedral. The peel of those bells is now referred to as the “alco’s chimes”.

The song is sometimes mistakenly attributed to another fine Irish author and songwriter, Samuel Lover. Lover did write a song called The Mountain Dew but it is entirely different.

Lover’s song is about a couple walking along the mountain top and the word dew has its literal meaning rather than a familiar term for illicit whiskey.

The Rare Old Mountain Dew has remained popular since it was first written and there are versions of it to be found all across the world. It has been recorded by several major folk groups including The Dubliners, The Clancys and Tommy Makem, and The Irish Rovers.