Waxies Dargle – a riotous, explosion of a song

The Waxies Dargle is a riotous, foot stomping song which is guaranteed to create a feelgood factor from the opening few notes.

It’s often used by bands as a way of grabbing an audience’s attention and getting a show off to a good start.

It can cut across even the noisiest bar rooms and silence the chatter.

In the late 19th century, wealthy Dubliners would enjoy trips to the nearby seaside town of Bray near the River Dargle.

Soon ‘going to the Dargle’ became a colloquial term for going on an annual outing.

It only referred to the rich, however, as the fare to towns like Bray were too expensive for most people. The less well off needed their own version of a ‘Dargle’.

Waxies Dargle was an outing for the working class 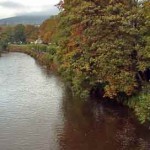 The poor had to settle for trips to places like Sandymount, a large beach just a few miles out on the south side of Dublin.

Irishtown and Ringsend were also popular as it only cost a few pence for a ride on the back of a bumpy horse drawn brewer’s dray cart, cramped together with a dozen other holidaymakers.

Waxies was a slang term for shoemakers who used wax to waterproof shoe and boot laces. They started organising excursions every year to the cheaper destinations.

These trips became known as the waxies dargles. Eventually, they became open to anyone, not just shoemakers.

Says my oul wan to your oul wan

The song The Waxies Dargle begins with the story of two women trying to raise money to go on the annual outing.

The phrase ‘oul wan’ refers to a woman. The word ‘oul’ is slang for old but despite this, it doesn’t mean the women involved are necessarily old.

Oul was used a lot in colloquial Irish speech and carried a light hearted, dismissive tone. In this context, oul wan refers to wife or possibly mother.