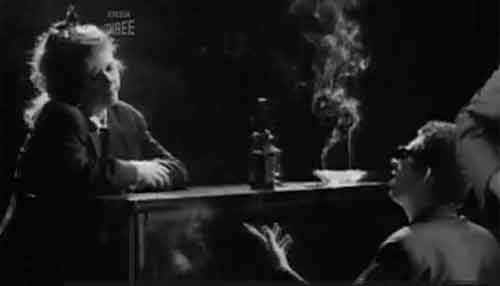 MacColl and MacGowan at the piano

In the UK it’s the most played Christmas song of the 21st century. It has been a hit all across the world, which is perhaps ironic because it ignores all the traditional elements of Christmas and serves up a dose of dark, bitter sweet reality.

For millions of people it is more than just a song … it’s a breath of fresh air that blows away the usual Christmas clichés and lets people know that it’s not unusual to feel lonely and desolate or to be at odds with loved ones.

Here’s a person like many of us who had dreams and here’s a man who has almost lost his dream.
Kirsty MacColl’s mum Jean

Fairytale was written by Shane MacGowan and Jem Finer of the Pogues. It was a track on the band’s third album, If I Should Fall from Grace with God, and was released as a single in 1987. Although it sounded perfect and complete when it was released, it had a painful birth lasting over two years.

MacGowan and Finer were constantly rewriting and editing. They abandoned it and returned to it several times before they finally got it right.

When they did eventually finish it, the band knew they had produced something special. Guitarist Phil Chevron said he cried with joy when he first heard the completed track blasting out through the studio speakers.

I’m proud of everybody involved in the song.
Shane MacGowan

In this section we have 14 pages covering every angle of Fairytale of New York from the way it was written and recorded to its impact on millions of people across the world.

The song was something of a departure in style for The Pogues. Their earlier work was often a fast and furious mix of punk and Irish folk music. Fairytale of New York is much gentler with a classic ballad melody and an orchestral string arrangement by Irish composer Fiachra Trench.

A Christmas anthem for the rejected

The guy is a bum who is living on the street. And he’s just won on a horse at the unlikely odds of 18-to-one, so you’re not even sure he is telling the truth.
Shane MacGowan

However, the conflict in the storyline showed that The Pogues had lost none of their hard edge. It’s a kind of Christmas anthem for the rejected.

The song loosely tells the story of an Irish immigrant in New York, reminiscing about the past as he sleeps off a drinking binge in the drunk tank of a New York police station. It features Shane MacGowan and Kirsty MacColl performing a call and response duet in which they fight and trade insults. They’re still together at the end of the song but it’s uncertain if their relationship will survive.

The title is taken from a novel by the Irish American author J P Donleavy. However, the title was added after the song was recorded and the words Fairytale of New York are never mentioned in the lyrics.

Part of the genius of the song is that it conjures up strong emotions in the listener yet the lyrics are relentlessly unsentimental and laced with bitterness, as when MacColl sings, Happy Christmas your arse I pray God it’s our last”.

It’s a relationship song. It says so much in such little time and it says so much by not saying anything.
Producer, Steve Lillywhite

This is not the Christmas of a Hollywood movie set. Fairytale of New York portrays the harsher side of the festive season and it creates a resonance in millions of people across the world every year.

Of course, most people don’t end up in a drunk tank, but they do have arguments with their partners and they do know what it’s like to experience loneliness, rejection and regret at a time when everyone else is enjoying themselves.