The rousing refrain of Fairytale of New York refers to “The Boys of the NYPD choir still singing Galway Bay”. There is a little poetic licence here because the New York Police Department doesn’t have a choir. 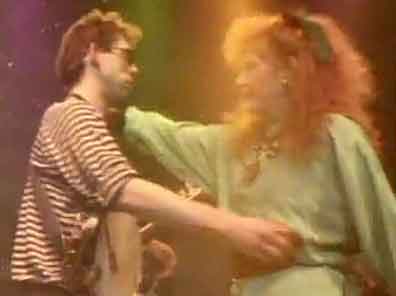 MacColl and MacGowan on stage

However, it does have some enthusiastic singers. Brian McCabe is a retired NYPD Detective Commander, a friend of Shane MacGowan and a big fan of Fairytale.

Speaking in the BBC documentary, Behind the Fairytale, he described how he and his fellow officers got to know MacGowan and how they loved to sing his song: “Speaking as an Irish American, with a great tradition in the NYPD, we used to have great enjoyment at the fact that Shane referenced the NYPD choir singing Galway Bay, which is a tin pan alley kind of song.

We realised that we were the NYPD choir

“There is no NYPD choir per se, but we would be singing along to the jukebox as this song was going and we came to the realisation that to a certain degree, we were the NYPD choir, whether we were singing Irish traditional songs or more modern songs. It spoke to us, both as a recognition of the profession we were involved in, but also of the much larger community that we were a part of. “

McCabe believes the song Galway Bay was well chosen by MacGowan because it struck at the heart of the Irish experience.

“When people came to America and established an Irish American identity, from the earliest days of the republic through to the post war period, they were saying goodbye forever to Ireland.

“That song, although at times it can be perceived as a bit hokey and all, speaks to that longing, particularly to that generation of Irish Americans, for a place that was left behind and they never return to – that’s always a bit idealised and made a beautiful memory. “

Meeting the kind of people Shane wrote about

McCabe was a plain clothes officer in New York. He met Shane MacGowan when The Pogues came to perform there in the mid 1980s. He says his work often brought him into contact with the kind of characters that MacGowan was writing about.

“In 1986, I was an anti-crime officer and I’d drive around in a yellow taxi. I had very long hair. I’d be in plain clothes with my partners and all, and New York was a much more dicey place at the time as well.

“We’d intervene in street crimes but always in the milieu would be people in the circumstances Shane was singing about.”

With a passing reference to MacGowan’s heavy drinking habits, McCabe said: “I was with Shane a few times when he wasn’t quite sure whether he was in New York or London, but he certainly tapped right into the community, the city scene, all that was going on. I think that Shane felt, as he may do when he’s with a certain crowd, that he’s home in a way.

“New York has that appeal to many people but to an artist and a character like Shane MacGowan, it would be particularly welcoming.”