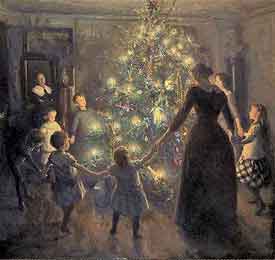 One of the great attractions of Fairytale of New York for many people is that it blows apart the myth of the perfect Christmas.

Every year the media sells a picture of happy families opening presents around the Christmas tree with everyone enjoying themselves, full of cheer and goodwill.

It’s an image that dates back to Dickens and has been kept alive ever since through numerous Hollywood movies such as Miracle on 34th Street.

While thousands of people do, of course, enjoy a happy Christmas, for thousands more it can be a very unhappy time, when the pressure to enjoy themselves only serves to highlight their sense of loneliness, poverty and heartache.

Fairytale of New York taps into this alternative view which is much more real to many people. Here we have a couple bickering over the past and on the verge of breaking up.

They have no money and very little hope as they descend into a world of fighting and recrimination. Steve Lillywhite, who produced Fairytale of New York, believes this gritty sense of realism is one of the main reasons for the song’s appeal.

The song is bleak but it is not without hope. The couple are still together at the end. They’re still fighting but there’s a sense that once they’ve had their say, they will continue and try again – just as millions of people across the world do every day of their lives.

Brian McCabe is a former New York police officer who became friendly with Shane MacGowan in the 1980s. He’s a big fan of Fairytale of New York and believes that a large part of its appeal is that for all its bleakness, there is still a chance of redemption for the warring couple.

“There are elements in that song that are sad and stern such as the words Kirsty uses when she speaks to him. But it’s still about, ‘hey it’s Christmas time and we’re going to make things better’.

“No matter how many times she says listen, it’s done, he’s like, aw we’ll give it a go. People respond to that. Nobody likes to quit.”